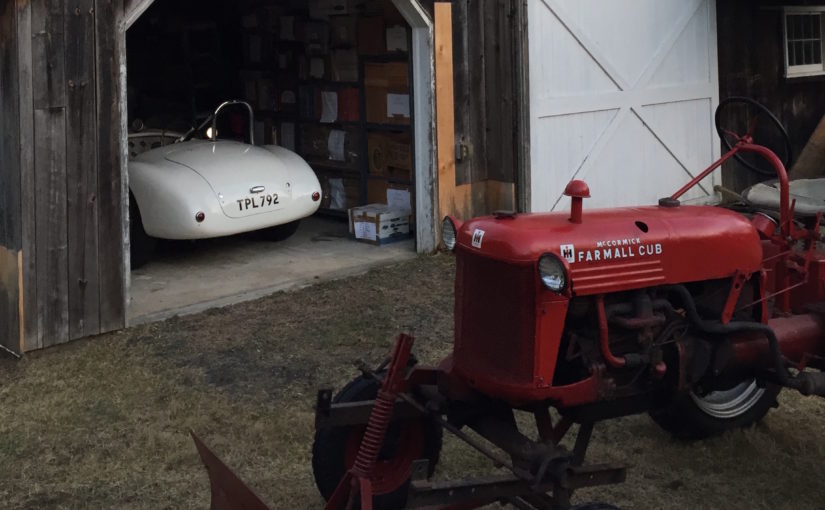 2017 was a great year and we bid it farewell with fondness. The market is robust especially for the unique and interesting.  Below are some of our favorites from the past year.

What happened to car 27?

BMW trounced the competition in the 1939 Mille Miglia and LeMans. The team came 1st, 2nd, 3rd in the 2 litre class, in both events. WW2 started a few months later. Car 27 vanished and had not been heard of since. Some of the BMW faithful were concerned it was destroyed during the war. It turns out it had been hiding a few miles away from our office in Connecticut, USA. It had been restored in the 1950’s as a street car. A factory race car in disguise! We are grateful to the BMW factory for coming out from Munich to inspect and confirm its history.

Of all the cars we had in 2017, this might be the most important. It is Granddad to the AC Cobra. Built by Tojeiro in 1952/53. Purchased by AC in 1953 and built up into their prototype AC Ace. London Motorshow in 1953. RAC Rally car – factory entry. This car created a stir in 1953 and photos can be found in virtually every auto magazine from that year. The car came with an extensive historical file. In later years had been vintage raced, but remains remarkably original. In 2017 it was displayed at the Simeone AC event and was in place of honor alongside their original Shelby Daytona Coupe. Currently in restoration in the UK.

Lamborghini LP400 Countach Periscopio. Chassis 1120034 was sold new in Lime green with pumpkin interior. Fabulous colors! Believed to have been the only Periscopio sold new into Luxembourg. Purchased out of long term USA ownership. It had been sitting in dry storage for decades. In 2017 the car was sold into the UK and is now under restoration.

I am not sure how it happened but in 2017 we had a two periscopios. 1120238 started life as a purple car with white interior. Fabulous Lamborghini colors! Sold new into Saudi Arabia. Now in Black and well restored. Placed 3rd in Concorso Italiano, 2015. We are pleased to have found it a new home. We suspect it may go back to its original color scheme.

Early history well documented by the Netherlands Bugatti club. Exported by Jean de Dobbeleer in the early 1960’s. Discovered in a barn in Massachusetts. A project T57 Bugatti – who could want for more!  We are keen to see how the restoration progresses.

This car came from the estate of Herb Tobin. Herb was a true enthusiast and will be missed by all who knew him. Our sincere sympathies to his friends and family.

Here is the second BMW 328 we had in 2017. A complete, matching number roadster. In need of restoration. Please contact us if you have interest in this car.

What a great Alfa, with a great history! Raced in the 1956 Mille Miglia. Etorre Morelli drove it alone, no navigator. Finishing the 1000 miles in 17 hrs 26 mins. We found the car in Toronto Canada and it is now being restored by a prominent American collector. We look forward to seeing it on the Mille Miglia soon.

Our thanks to John DeBoer for helping identify its history. Full details on the car and its history here…

A lovely, well preserved 330GTS. Same family since the 1970’s. We end up with more project cars than anything else, so it was a treat to have such a lovely Ferrari in house.

Many of us are familiar with the knobbly Listers (typically Jaguar and Chevy powered) but previous to the knobbly’s, Lister made the “Flat Iron” cars. Customer cars were Bristol powered, the works raced a Maserati A6G powered car. It has a long history with Lister and Archie Scott Brown racing in the UK in the 1950’s. Its modern history is in the USA, vintage racing. It has now been repatriated back to England.

Believed to be the very first Tojeiro built. This car turned up in the Bay Area of California. It had raced in CA in the 1960’s. It came with extensive English paperwork. An excellent car for restoration. Repatriated back to the UK. Keep an eye on Goodwood. We are bound to see it there in the next year or two.

Zagato has been bodying Alfa’s since the 1920’s. It can be said that the best Alfa’s all carry Zagato bodies. The 2600SZ is the last of the 1960’s Zagato’s. Only 105 cars made. Quick, nimble, unique. This is an exciting car for us. We’ve had several of these over the years, but this is the very first nice driver to come to us. It might just become the office runabout for a few weeks.  Available (kind of)…

1 of only 75 cars built for the US market

This car had sat in dry safe storage. Babied but unused for the last 20 years. Just 2,302 miles from new. Just as it left the factory. Still had the new car smell even after 25yrs. As close as we’ve come to having a new Ferrari. Fabulous!