I’d just purchased a Maserati 3500GT. Now all I had to do was find it! 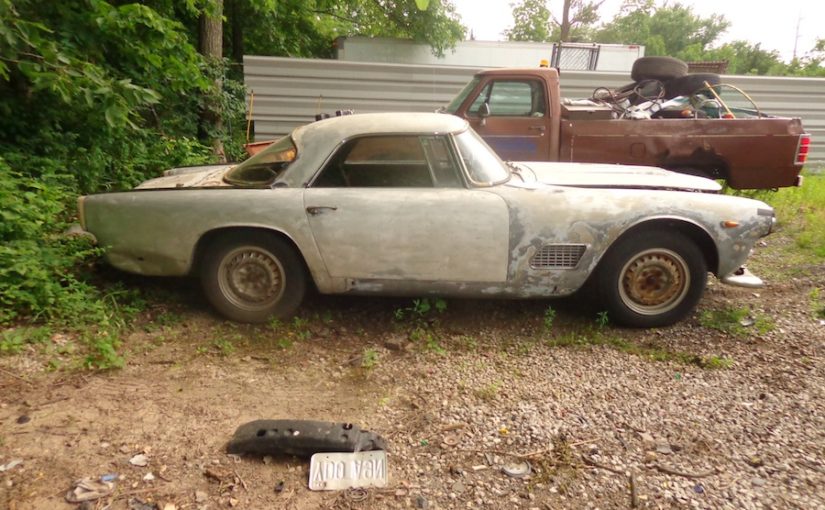 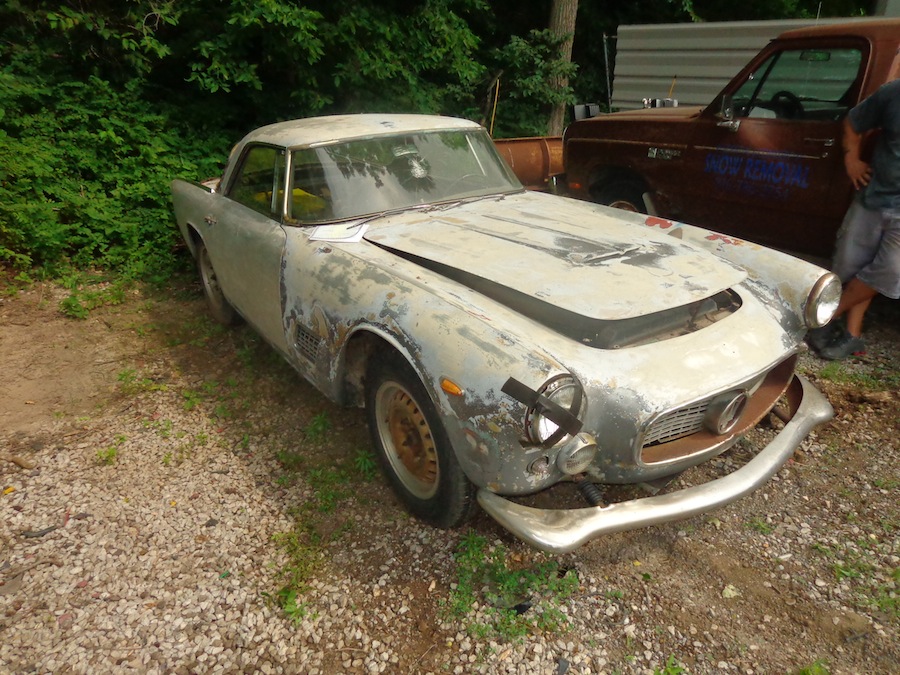 Looking thru an old notebook I came across a few scribbled notes on a Maserati 3500GT that I had found 20+ years earlier, sitting under a tree, in Kansas City.

It was rusty, ugly and irresistible. The owner WOULD NOT sell it to me.

“After all these years, I wonder if it is still there?”

The phone number was disconnected but after a little noodling around on the Internet I found the owner’s new number and had him on the phone.
The car had been sold over 15yrs ago to a man who lived across the street.  He had taken the car, but never paid for it!   The Seller had lost track of him BUT (most importantly) the Seller still had the title.
There is something about owning a car with a problem that appeals to me (it’s nutty, but true) and this car sounded like it had a real problem.
After a little more conversation I was the proud new owner.  I had just purchased a Maserati 3500GT. Now all I had to do was find it!!
I had the would-be buyer’s name and a 15 year old address. He had moved and after some more noodling around I discovered the he had moved only one street over. Before long, I had his phone number and was talking to him.

This first conversation was the critical one.

The man admitted that he still had the car (Yippee!). He had intended to purchase it but had never had enough money to make the payments he’d initially agreed to. The car was stored at the back of a building behind his house. It would take a week or more, but he would get it out for me.
Wow! That was easy.  And then the waiting began.  It was one excuse after another. Before long he stopped taking my phone calls and refused to talk to me.
I sat patiently for a while, but sometimes you need more than patience.   I was in Connecticut, a thousand miles away, so a Private Investigator was what was needed. I found a great one. His first plan was to sit outside the fella’s house and talk with him when he came home. It worked.  “Yes, he still had the car and would get it out soon”.  Then nothing.  A couple of weeks went by – More Nothing. The private investigator talked to neighbors. I called the man’s parents asking if they could get a message to him (I’m still not sure if that was a good idea).  Finally all was lost. No contact. The only option was to hire a lawyer.  Lawyer letters were sent. More messages left and finally the man answered the phone.  “Oh that thing. I pushed it out on the street weeks ago” WHAT?   The man calmly explained that he had pushed the car onto the street and the City of Kansas City had come along and towed it.  Where was it now?? Who knew!

This was a game changer.

I called the City. They knew nothing. “If we have it then it’s in one of the Impound Lots”. After as little as 10days in impound the City can sell a car off as “Junk”  (We may have already lost her!!)   They gave me a list of all companies the City used. One call after another – Nothing!   Then finally I got a “Maybe”.  “Yes, we have an old car. Yes it is a two door. Yes a coupe.  Maserati?  Not sure.”  I emailed them a photo of a 3500GT and I got the nod. “Yes, that’s what it looks like”.
My feet didn’t touch the ground! I flew out the door, off to the airport – title in hand. The next morning saw me in Kansas City waiting outside a chain link fence. 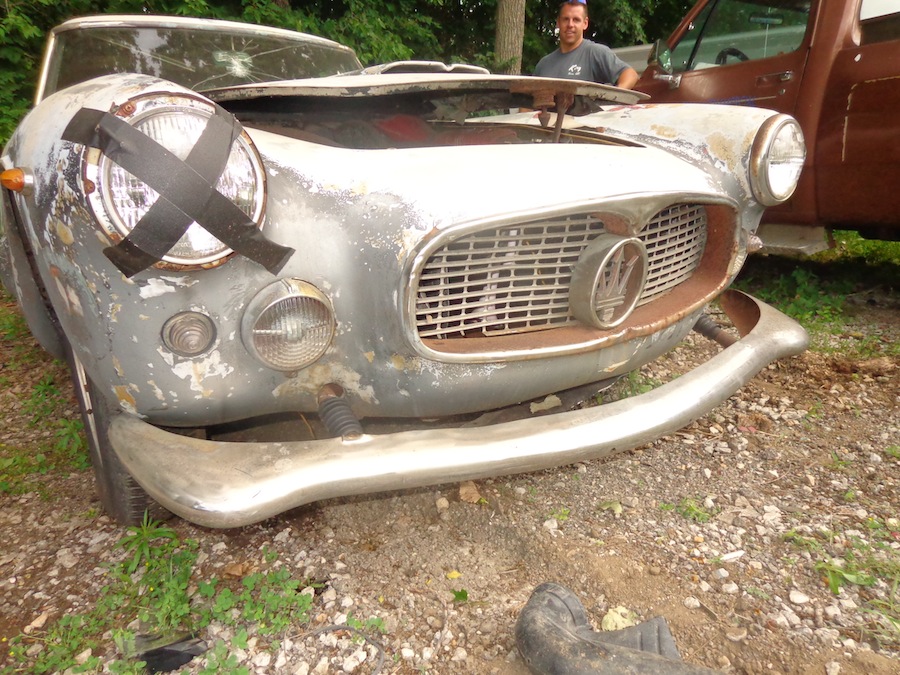 She came with a bill for 46 days storage, but well worth it. 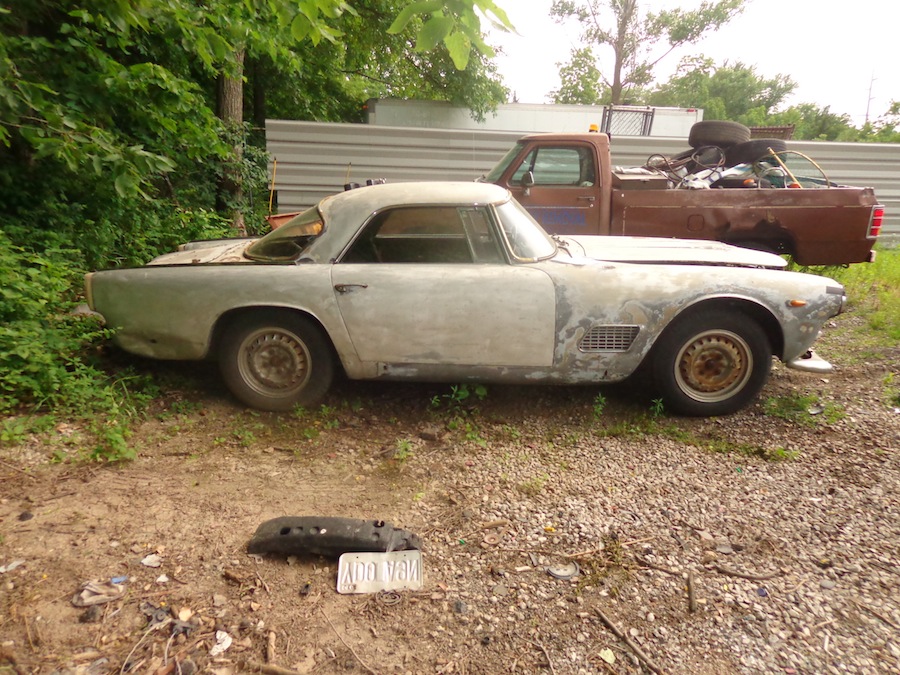